How to use hidden fields in Leadformly

Hidden fields capture information from a URL parameter and then include it with a form submission.

Written by Anna Hamzah
Updated over a week ago

Hidden fields have many uses. For example, they can be used to:

Hidden fields capture information from a URL parameter and then include it with a form submission as if the user had filled out a form field.

For example, if you want to know which marketing campaigns your leads are coming from, you could send your leads to a URL with the campaign name in the URL, such as:

If your form had a hidden field called 'campaign' it would capture the value (twitter) from the URL and populate a hidden field, submitting it alongside the other information in your form.

Progressive profiling is when you capture additional information about a lead over time.

As you can see in the example below, the email address appears in the URL as a parameter. Despite the email address not being entered in the form, it is being submitted along with the data that has been entered.

If you're running a marketing campaign, you probably want to know which leads were generated from that campaign. You can attach this information to each form submission using hidden fields.

If you're using Google's UTM tracking, your landing page URL will look something like this.

In Leadformly, you could create hidden fields for: 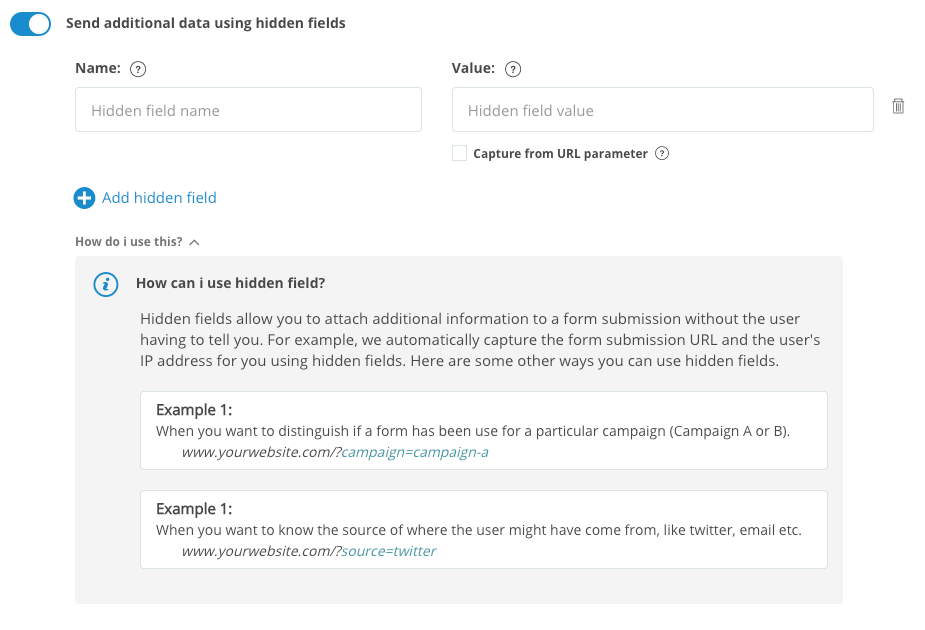 Now, every time a lead submits your form from this URL you will know precisely which campaign to attribute them to.

Did this answer your question?